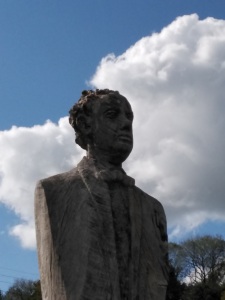 Today is National Poetry Day.  To celebrate it here are three poems.  Not mine I hasten to add. But three poems I particularly like.

Why not comment below and let me know your favourite poem?  And please feel free to post it so others can enjoy it too.

National Poetry Day is a fairly new thing.  It was started in 1994 by the charity Forward Arts Foundation. Their mission is to celebrate excellence in poetry.

I have loved this poem since I first read it as a child. It’s all about a small child’s imagination and the idea of floating a paper boat in the gutter.

I love the concept that “away down the river” other children will find the little paper boat and play with it themselves.

I doubt that many children today would want to play with a paper boat or even know how to make one!

Where Go The Boats?

Dark brown is the river.
Golden is the sand.
It flows along for ever,
With trees on either hand.

Green leaves a-floating,
Castles of the foam,
Boats of mine a-boating –
Where will all come home?

Away down the river,
A hundred miles or more,
Other little children
Shall bring my boats ashore.

I think this is a poem that strikes a chord with many people, particularly when they get older and imagine what might have been!

The Road Not Taken

Two roads diverged in a yellow wood,
And sorry I could not travel both
And be one traveller, long I stood
And looked down one as far as I could
To where it bent in the undergrowth;

Then took the other, as just as fair,
And having perhaps the better claim,
Because it was grassy and wanted wear;
Though as for that the passing there
Had worn them really about the same,

And both that morning equally lay
In leaves no step had trodden black.
Oh, I kept the first for another day!
Yet knowing how way leads on to way,
I doubted if I should ever come back.

I shall be telling this with a sigh
Somewhere ages and ages hence:
Two roads diverged in a wood, and I—
I took the one less travelled by,
And that has made all the difference.

I’ve recently returned from a holiday in Wales. OH (other half) and I visited the village of Laugharne  (pronounced Larne) where Dylan Thomas lived for the last fifteen years of his life.

We saw the shack where he did much of his writing, the boathouse where he had lived with his wife and children and also visited his simple grave in the nearby churchyard.

Do not go gentle into that good night

Do not go gentle into that good night,
Old age should burn and rave at close of day;
Rage, rage against the dying of the light.

Though wise men at their end know dark is right,
Because their words had forked no lightning they
Do not go gentle into that good night.

Good men, the last wave by, crying how bright
Their frail deeds might have danced in a green bay,
Rage, rage against the dying of the light.

Wild men who caught and sang the sun in flight,
And learn, too late, they grieved it on its way,
Do not go gentle into that good night.

Grave men, near death, who see with blinding sight
Blind eyes could blaze like meteors and be gay,
Rage, rage against the dying of the light.

And you, my father, there on that sad height,
Curse, bless, me now with your fierce tears, I pray.
Do not go gentle into that good night.
Rage, rage against the dying of the light.

© My photos show a wooden statue of Dylan Thomas, “The Boathouse” where he lived for the last four years of his life and his grave.

This site uses Akismet to reduce spam. Learn how your comment data is processed.